I'm only an intermediate player (Elo perhaps 1500 if given enough time), but I did once checkmate some software that "Micro Power" released in 1982 for the then very new BBC Micro Model B (which it ran in screen mode 1)---and as this program always replied to a given sequence of moves in the same way (no random factor), any win against it can be repeated every time and therefore counts as having "weakly solved" that level. I first did this by lasting as long as I could with equal-material exchange, knowing that microcomputers of the time were more likely to play badly in the endgame, but it turns out there are considerably shorter solutions.

MicroPower released three versions of Chess that ran on the BBC Micro: This wouldn't have been so bad if it weren't for how the response to the "Level?" question is handled by the 1982 version---you'll find the relevant 6502 code at RAM address &1DF2 (or &2DF2 before relocation)---if the key pressed does not fall between digits 1 and 6, it just sets it to 2 without saying anything.

So if you read the loader instructions as I did, you'll think "best play" is Level 9, but when you choose Level 9 you will get Level 2 (equivalent to Level 3 on the Electron version).

This was my first solution, in 89 moves (I could have checkmated on move 47 but then we wouldn't have seen an empty-board endgame); the computer made striking mistakes on moves 45, 67 and 76. The program was set to control the Black pieces, and I thought I was playing "Level 9" as I didn't know about the above level-numbering mix-up. (On the other hand, the real best-play levels are so slow they make only a few moves per day, and I doubt anyone would have let me run a computer for long enough to reach an endgame at that speed.)

In more modern times I tried a similar technique on Magnus Carlsen's 2014 iOS app and narrowly beat "age 10" (which is different from Magnus's real age 10: Tord Romstad set progress more 'linear' when tuning his Stockfish predecessor for the app)---it let me win an otherwise-drawn endgame by responding to move 78 inaccurately. These games are not usually reproducible as the engine adds a random factor, but here it is for reference:

In the BBC Micro days I had no way of knowing about Brian Wall's "fishing-pole trap" operated by black (open with knights and sacrifice one on g4 to expose white's castled king)---I don't think it was published before the 21st century (unless someone discovered it independently). Experimenting on an emulator shows the BBC Micro's Level 2 is vulnerable to this trap and it reduces the game length to 14 moves, which is rather fewer than I originally took:

This also works on the Electron version's Level 3 if it starts with e4 not d4. It does not work on higher levels.

The shortest game I found against an unassisted modern engine was 16 moves, with MicroPower level 2 controlling the white pieces against 2002's Sjeng 11 (the engine behind Apple Chess) in a mid-level mode:

I was able to reduce this to 14 moves as white by manually playing an unusual opening until the computer put its king in a risky place (misfired heuristic?), then letting a modern engine "do the honours" from move 8:

and then a couple of manual experiments shortened this still further, to a 12-move game that (oddly enough) gives discovered checkmate by 'pawn to king 4': 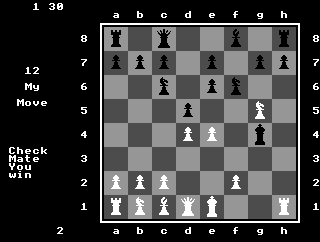 This works on Level 2, but meets a different response on Level 1 that requires another half-dozen moves to win.

If the exact algorithm is known for a deterministic weaker engine then I suppose a stronger engine could be "tuned" to win faster by laying 'traps'---non-best moves that result in this particular opponent making an even bigger mistake---by modifying the minimax algorithm in the stronger engine to prune out lines the weaker engine wouldn't choose (e.g. never mind "10. g4 is not as good as Qd3 because the black king could go back to g6 and escape our forced mate in 4" if we know it'll actually go to h4 and we mate in 3). This would probably amount to emulating the weaker engine (with its different static evaluator and search depth) at every candidate 'opponent to move' position instead of doing alpha-beta pruning (because alpha-beta pruning is not applicable to trees where there's only ever one opponent move), but you might want to limit this "trap pruning" to upper levels of the tree (probably down to at most the difference between the two engines' ply depths), and there'll be places where the simulation of the weak engine can be optimised.

Now we know I was actually playing Level 2 (not 9), I suppose for completeness I should also post solutions to the actual higher levels (I took some hints from modern engines to save time).

MicroPower's "Replay" feature normally plays back the last-played game. The limit is 150 moves each (actually it's 303 ply but castling counts as 2½ ply); Replay also has display bugs if you've played 130-odd moves and left the game unfinished.

If you choose Replay before any game has been played, it gives you a 41-move sample game that seems incomplete. Moves are stored in RAM at &19A0 (relocated from &29A0, from file CHESS offset BA0, from disk-image offset 1FA0); the first two bytes point to the next free slot, then start and destination squares are encoded as 10*(rank+1)+file where rank and file start at 1; for castling the king's move is coded first and then the rook's after a byte 01.

MicroPower documented the inclusion of the Fischer-Spassky game on the back cover of the 1982 tape release, but then it was removed for the 1983 "Electron" release (probably because extra code necessitated moving the Replay buffer to &400 which is outside the program's load-address range and they didn't fancy writing a relocator), and when they later brought back the 1982 version for a disk release they apparently forgot it included a Fischer-Spassky game and didn't mention it, making it a so-called "easter egg". (At school I assumed it to be a pre-generated computer self-play and wondered why I could never get the same moves with the Play option.)

Other differences with the Electron version

As already mentioned, the 1983 re-release "for the Acorn Electron" (although the BBC Micro can run either version) changed the level numbers---levels 1, 2, 3, 4 and 5 were renumbered 1, 3, 5, 7 and 9, with randomised intermediate levels added and the old Level 6 dropped---and the bundled copy of the Fischer-Spassky game was removed.

The bugs associated with the Delete key are still present.

Tube compatibility and other Chess software

The only Chess engine reviewed by Beebug was Martin Bryant's Colossus in 1987 (plays at 12-ply with estimated 1850 Elo if given enough time, and has a monochrome Mode 4 display); this outperformed earlier engines but fewer schools had the disk. Colossus does not always make the same moves, so you won't be able to "solve" a level with a single win as you can with MicroPower.

Tube compatibility is relevant if you have a "PiTubeDirect" ~140× speed second processor instead of a BBC emulator running at ~15× speed---although both options are now outpaced by Chris Evans' "BeebJIT" which can achieve 5000+× speed on AMD64 (and has a mode to do so while keeping timers at normal speed, so you don't have to toggle back to 1× to type as you do with older emulators).

MicroPower Chess is basically Tube-compatible but the chessboard is invisible: you see only the coordinates. Colossus however has more serious Tube problems. Acornsoft Chess (which Arthur Norman helped write) and Computer Concepts Chess (and its Superior re-release, both by David Thompson) have full Tube compatibility and don't always make the same moves, while Bug-Byte Chess is fully Tube compatible and deterministic (although slow to update the screen)---but it's less clear what counts as "solving" it as its search parameters may be configured in hundreds of ways (albeit none of them strong by modern standards)---however these programs all use low-resolution Mode 5 pieces that can be hard to tell apart, meaning that, in order to avoid making blunders due to misidentifying an opponent piece, you either have to get used to their odd pixel art or else keep track of the position separately, meaning there's little advantage over MicroPower's invisible board; perhaps the lack of Mode 1 graphics contributed to these programs' being less popular with schools than MicroPower's.

All material © Silas S. Brown unless otherwise stated.
Apple is a trademark of Apple Inc.
Any other trademarks I mentioned without realising are trademarks of their respective holders.