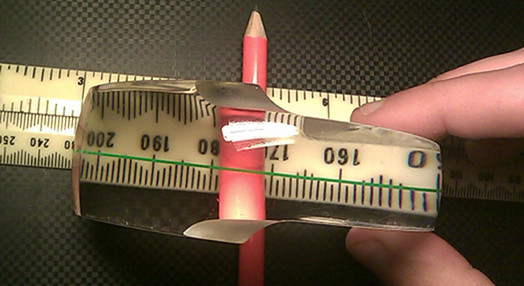 This photograph shows a ``hedgehog'' magnifier being held under a fluorescent task lamp, with additional ambient light from a window. In practice the lamp's reflection can be reduced by better positioning.

This type of LVA is ``stood'' on the page (``the hedgehog'' has ``feet'' which are not seen when viewed from the top), and it has an aspheric (non-spherical) curvature which reduces image distortion over a larger area than a normal lens-based magnifier does. Some distortion is still present in this picture because I wanted to show the magnifier's effect on a ruler and a pencil, and it was hard to hold it flat over these three-dimensional objects; it's better when rested on a printed page.

The magnifier seems to be made from some kind of acrylic plastic. I once dropped one at an outdoor conference venue; it bounced down a flight of steps (gradient was about 30°) and then an attendant caught it in mid-air like a ball. The impacts had severely limited its visual clarity (I replaced it soon after), but it more-or-less stayed in one piece. Chipping can occur with daily use; I try to keep my best one at home and use another for carrying, as some `bumps' are inevitable.

The Hedgehog's magnification is advertised as 4.25x (often rounded up to 4.3), which must be an area factor rather than a scale factor (the corresponding scale factor is 2.06; perhaps the sales team preferred to quote the higher number). It's not mathematically possible for unpowered lenses to magnify much more than this unless the viewing area is reduced; video magnifiers can do better but they require power. Fresnel-lens ``full page magnifiers'' don't usually reach the Hedgehog's level of magnification, and lack the ability to double-up as a ``pointing aid'' for readers with gaze-tracking issues (nystagmus etc).

Scale factor 2.06 is enough to make 12-point text look like 24.7-point, and 8-point look like 16.5. (This is why I prefer to use scale factors---you can calculate what it does to font sizes by simple multiplication.)

In this picture, the magnification factor is not constant because (as mentioned above) the magnifier is not being rested flat. The leftmost millimetre seems barely 1.3 times as long as the unmagnified ones, while the scale factor on the far right exceeds 4.3! It's difficult to achieve this in practice however---normally the reader would simply place the magnifier flat on the text and use it as designed to get a fairly constant scale factor of 2.06.

I'm not sure why these things are called ``brightfield'' magnifiers. Bright field microscopy involves lighting a microscope plate from behind, so that objects appear dark against a light background (field). I suppose brightfield magnifiers are named because they tend to concentrate incident light on the area being magnified; they certainly don't require lighting from below.

The search term "brightfield magnifier" should retrieve some alternatives to the Hedgehog, such as the 1.7x and 2x dome magnifiers made by Schweizer, COIL and MagnaBrite, which can be cheaper if you don't need the extra bit of magnification provided by the Hedgehog, or the Eschenbach stand magnifiers, which slightly exceed the Hedgehog's magnification but can now be harder to obtain (and the last one I had tended to scratch at the base because it lacked the Hedgehog's ``feet'', although I'm told Eschenbach have somehow mitigated the scratching issue since then).

The most expensive ones have built-in LED lighting and other perks, but I wouldn't want one of those to be involved in an accident! (Note to marketers: expensive kit is less appealing when you realise it'll sometimes need replacing. There's no such thing as a ``one-off purchase'' if it breaks when dropped. Insurance is not the answer, because we all know those companies do everything they can to avoid paying up. We just have to stick to a price range that we wouldn't mind paying again if there's an incident.)

The Hedgehog's real name is Loupes Hautes Performances (LHP) T4. (The embossed logo says T4; the Brevete SGDG mark means ``patented without government guarantee'' and is not part of the product name.) It used to be listed by UK suppliers as "hedgehog magnifier" or "The Hedgehog", but after the LHP company ceased trading by 2015 and their brand-mark was acquired by Lesa France, Lesa didn't keep those UK suppliers stocked for long, preferring to sell it directly on Lesa's website. UK residents who are registered blind or partially sighted can apply to be exempted from VAT and postage costs on specialist magnifiers, but I don't know how to do this when dealing directly with a non-UK supplier. The last of the UK stock was generally sold at a heavy discount to clear it, although, confusingly, suppliers didn't prominently say that's what they were doing---it just looked like a large price difference between catalogues. All of this cheaper UK stock has now been exhausted, leaving Lesa as the only option.

Another magnifier by LHP---the LHP 26---has sometimes been called a ``large Hedgehog'' as it adds about 50% more height to the viewable area with the same magnification factor. I wouldn't call it a `true' Hedgehog magnifier: it lacks the ``feet'' (the base is very nearly in contact with the page) and it's implemented as two lenses on a right-handed stand, with a gap creating an extra surface to pick up dust. It has a built-in incandescent lamp but the electrics are awful: they used a 2.5mm "phone" type connector which is not designed for power and can short-circuit and spark; the unit I tried also had bad soldering, causing the light to flash as the magnifier is moved over the page and to fail completely after less than an hour of use, so I removed the lamp housing. When used without its own lamp, the 26 blocks more external light than the T4 hedgehog does, although the difference is not so bad with a well-positioned desk lamp. But for portable use I wouldn't suggest the 26 unless you can't get a T4.

(When I accidentally dropped the 26 onto laminate flooring, this resulted in a minor scratch to the top lens but it was knocked out of its housing and became loose after reattachment---it seems they use a small amount of glue on the sides while the frame is being put together from three parts, which makes it difficult to re-glue a lens into the completed frame.)

I've sometimes been asked where to buy a T4 Hedgehog in East Asia; sorry I don't know, but they're light to take in hand luggage. Perhaps Lesa should open a market over there; may I suggest the Chinese name  .

I wrote this page because I sometimes get questions about the Hedgehog I use. Usual disclaimers apply; it is not professional medical, legal, financial or electrical advice.